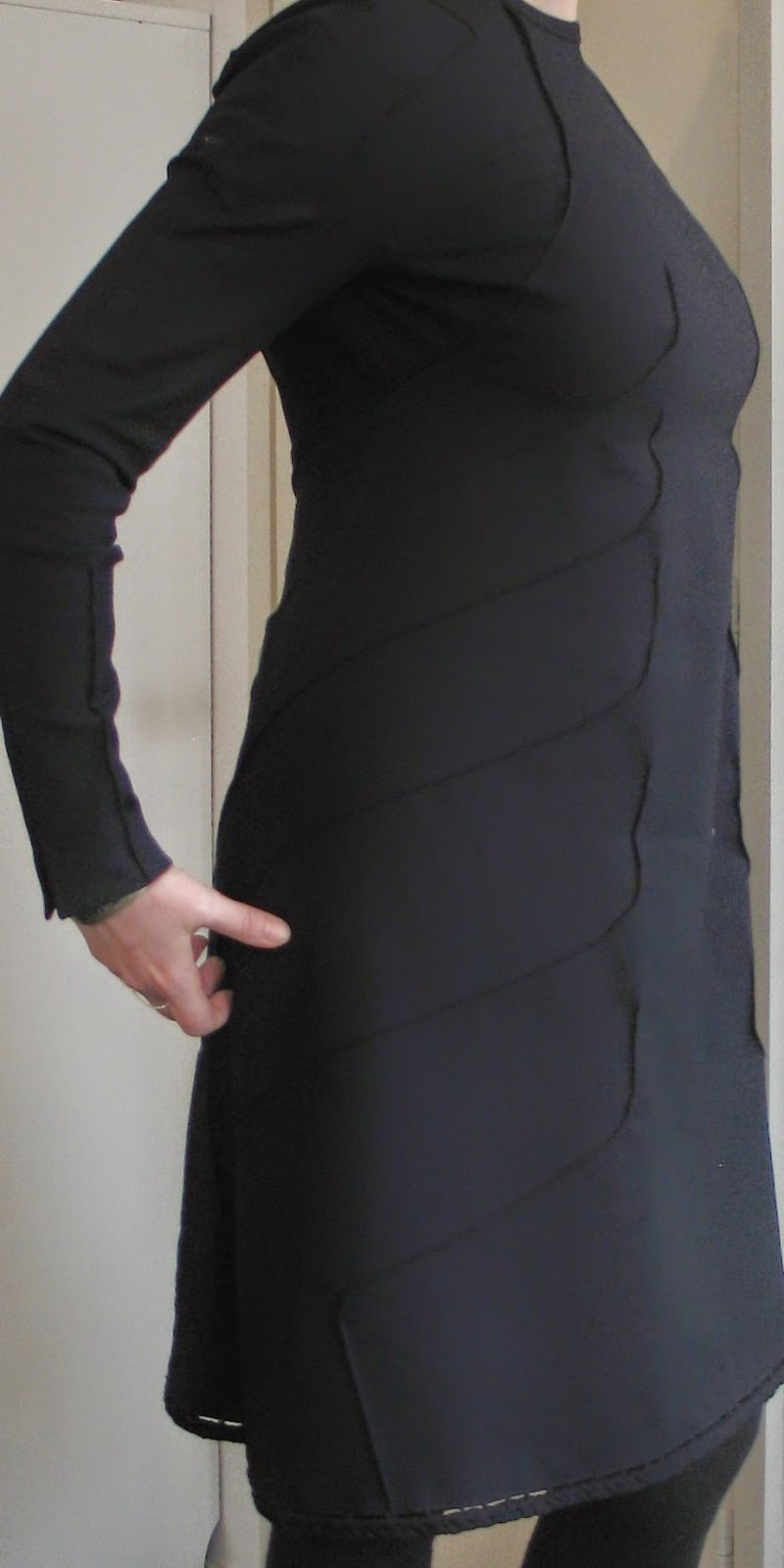 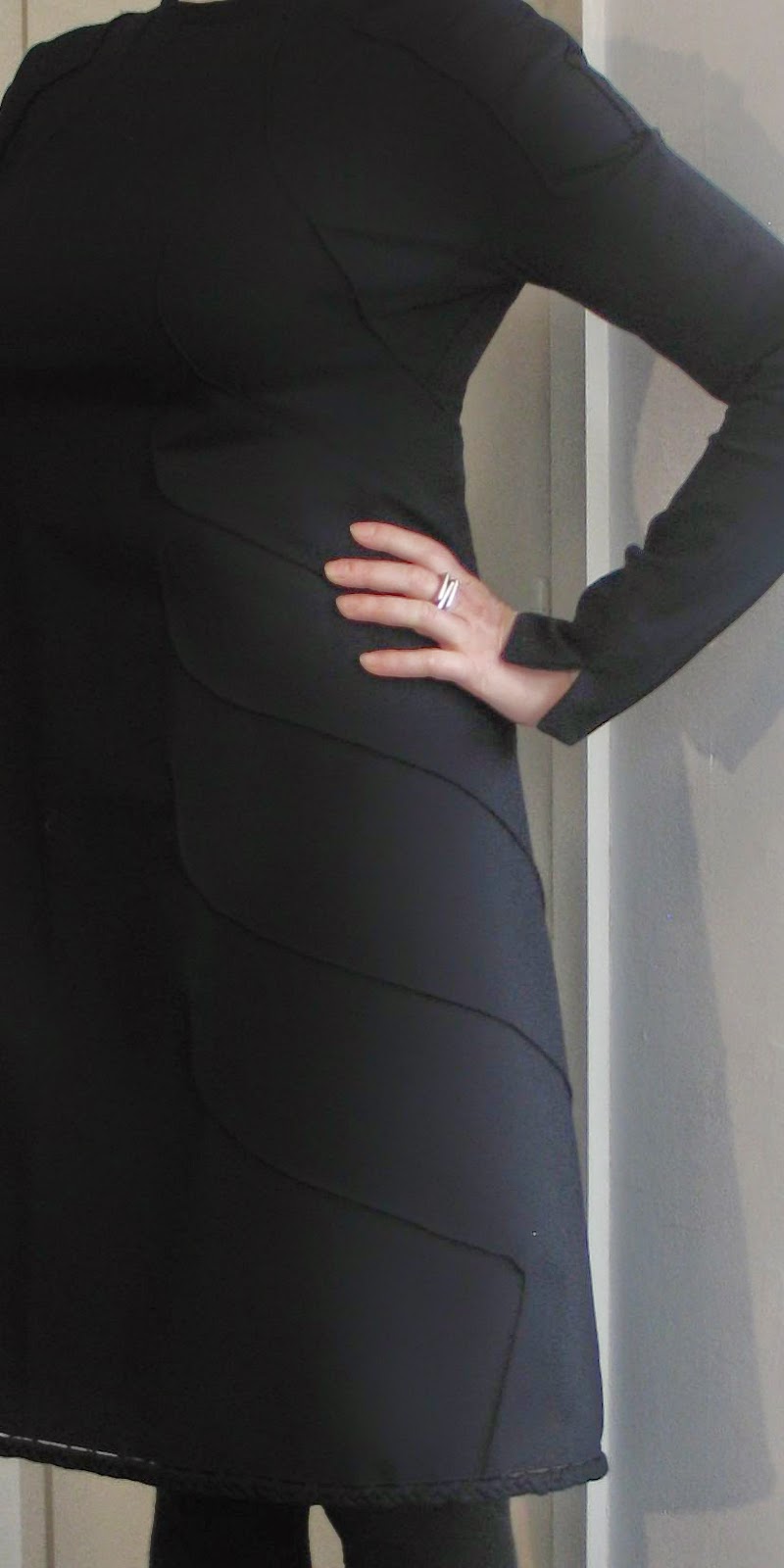 Appropriated Edge has been woefully silent for a month or so, during which I've been learning some valuable lessons in the art of community engagement, an essential life skill for an aspiring blogger. Here on the Internet, we all have the potential to become part of a shared global conversation in which we are both content providers and audience members, an ideal which collapses when all that time you spent engaging with the community has kept you from updating your blog.

So I've decided to begin again with the garment which in a roundabout way inspired me to start this enterprise in the first place, a project which I began as 2014 was drawing to a close. This is the Ralph Rucci pin tuck dress, a notoriously complicated piece of home couture which I would probably never have attempted without the inspiration of one particularly talented sewing blogger.

I sew for all kinds of reasons, chief among them being that I get to make things like this. My lifelong fascination with all things sartorial is due in no small part to three decades of sewing experience, and a great deal of what I know I owe to Vogue McCalls' designer patterns. Rucci's designs have long been a feature of this collection, which has in the past published couture by such luminaries as Oscar de la Renta and Alexander McQueen for Givenchy. At their finest they challenge in the making, reward in the wearing, and are one of the best ways for the non-professional to see inside the process of high fashion garment creation.

The Internet has radically extended the possibilities for individuals to take control of production, and it's no accident that its rise coincided with a resurgence of interest in the craft of dressmaking. We now have the potential to communicate, share tips and source materials in a way that was impossible twenty years ago. The knock-on effect of shows such as The Great British Sewing Bee, which began again this week, pushes it ever further into the mainstream.

Big business can't help but recognise this as a threat and attempt to work around it. In an unparalleled feat of mansplaining, Fortune 500 alumnus Stefan Engeseth has recently been pontificating on how Swedish flat-pack giant Ikea might muscle in for a piece of the action, as if repackaging entry level sewing like a piece of self-assembly furniture wasn't reinventing the wheel and would actually fill a gap in the market. This idea demonstrates a fundamental lack of appreciation for the basics of garment construction (for a moment I even wondered if he wore clothes) and possibly a misanthropic desire for the total commodification of creative expression in personal style.


Engeseth's bizarre proposal also disregards the fact that for many people sewing is an addictive end in itself. We sew to make things we can't buy in the shops. Mass-produced prepackaged kits are unlikely to deliver much more than a grim appreciation for the monotonous, back-breaking work that goes into fast fashion and would most likely serve as a gateway drug to the harder stuff. It doesn't take long to tire of two seams and a waistband and move on to intricate patterns and fine materials. Many of us will take on the laborious construction of garments we have no prospect of ever wearing purely for the challenge, the sense of achievement and the subsequent Internet bragging rights.


There's no better example of this than Alexander McQueen’s kimono jacket, inspired by a garment from the late genius's 2003 collection. This pattern, available for download, is notorious for the complexity of its pleating detail, the paucity of its instructions, and its tiny one-size-fits-nobody dimensions. This hasn't stopped hoards of seamstresses taking it on, posting the results and crucially improving on the construction manual.


But if Alexander McQueen’s kimono jacket is the Mount Everest of home sewing, the Pin Tuck Dress must surely its Siula Grande. This is the road less travelled, the one that’s defeated armies of experienced dressmakers, the one where no-one has posted a picture of a completed garment. Blog posts tackling the project peter out ominously before the end, never to be seen or heard of again.

This pattern makes you wonder who might be foolish enough to try it. You buy it out of curiosity and get it out to look at occasionally, asking yourself who on earth has the skill and patience to sew all those pin tucks. Then one day you discover that someone has actually made it. Her brain is melting. She hasn’t talked about anything else for a month. But the dress looks amazing. And that’s the moment you realise that the next deranged sewist to try to conquer those dizzying heights will be you.


If you're here for my musings on style and identity and have no interest in nerdy construction details, you can stop reading now and watch this video of Ralph Rucci's Spring 2015 show. This spring's Vogue collection features a look from his 2014 collection, so I'm very curious to see which if any of these models will show up next in next year's catalogue.

Are they distracted? Good. Sewing geeks gather round. What I’m about to share is all about helping you avoid PTSD, aka Pin Tuck Stitching Disaster.

What makes this pattern so daunting and so seductive are the pin tucks that wrap around the dress giving it such a graceful form and structure. Nothing else about the project should be particularly challenging to the skilled dressmaker and when it comes down to it the pin tucks aren’t that difficult either. But the pattern instructions are woefully inadequate in this regard, and the blogosphere rings with the sound of silence, so I’ll describe in detail the process that worked for me. All depends on making the right choices and no shortcuts, because there really is no place to hide.

I used poly-viscose scuba knit, a very dense, fine-gauge elastane double knit fabric with a generous two way stretch and 100% recovery. I think this choice more than anything was crucial to success on this project because it’s very forgiving. It didn’t pucker around the pin tucks, it recovered its shape after sewing and it took a fair amount of punishment when I needed to unpick and rework. I wouldn’t want to try this with a material that doesn’t have these properties and all the tucks came out looking like ribs in the best possible way.

I marked out the tucks with tailor tacks from the paper pattern and then thread traced them using these markings. This was time-consuming but well worth the effort, because the fabric always folded easily and accurately along the line of thread.

Shaping and sewing the tucks

To form the tucks I folded along the traced lines, pinning transverse to the longer tucks on the sleeves and dress body and basting them on the shoulders. Then I pressed before stitching. All tucks were stitched with a single needle and an edge stitching foot. I don’t think a double needle would be any help here, certainly not on the tight corners.

To sew transverse to the shoulder seam, I cut a notch into the seam allowance directly underneath the line of the tuck. This gave the space to fold the fabric perpendicularly, eliminating undesirable bulk without compromising the integrity of the seam.

The hardest place to sew the tucks is where they curve tightly over the collar bone on either side of the shoulder. I tried a few different methods on remnants before tackling them on the garment pieces (practise, practise, practise!) and this is what seemed to work best.

Catherine’s tip of sewing with the inside of the curve uppermost didn't work at all with this bulky material, and I found it easier the other way around so as to control the fullness of the fabric and prevent wrinkling. I think it's worth trying both ways and seeing what works for you.

Pinning or basting didn’t seem to help much here either, in fact it seemed to make wrinkling worse, so in the end I sewed these tucks freestyle. They are not terribly accurate but I am fairly happy with the result, particularly given how much unpicking and reworking was needed.

I've posted a supplementary review on sewing.patternreview if you want to know more.