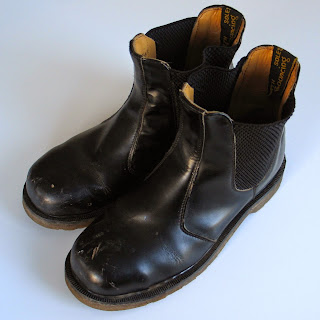 I once had a job that required me to walk around construction sites, for which I needed safety boots. (Actually it was several jobs and it was a career, but I've since fixed that.) At the time, stylish protective footwear for ladies was very much an oxymoron, so I had no choice but to use my imagination. I'd been through numerous pairs of fugly shoes by the time I discovered these beauties, Classic Docs from the time when Docs were still Made in England.


There's a lot to say about the role Dr Martens have played in Britain's vibrant popular culture, riddled as it is with the angry politics of class warfare played out to a soundtrack of the Clash and the Sex Pistols. Long before they rose again as a fashion brand, DMs were the go-to no-nonsense bovver boot of choice for policemen, football hooligans and political extremists of all flavours. Eight holes and a steel toecap spelled trouble, the kind of people you'd cross the street to avoid.

I can't deny this mix of sensible and threatening appealed to me but I wasn't going to mark myself out as an agitator so I chose the more subtle pull-on design with the elasticated sides. Nonetheless, the steel toecap brought with it the weight of confidence you gain knowing you can deliver a firm kick in the shins to anyone who thinks he can have a go.

Younger me was well pleased to wear them with cigarette pants and a tailored jacket when on duty and even happier when I figured out how to rock them with a short skirt and opaque tights at weekends. When there was real work to be done I was allowed to put on the overalls and get dirty and my boots earned a lattice of choppy scratches on the toecaps from kicking around among large pieces of sharp metal.

What I failed to appreciate in my youthful naiveté was what a radical statement a woman on a construction site could still be. This was after all man's man's world, and it functioned as if our grandmothers hadn't already proven otherwise. During WWII, Allied governments recruited millions of housewives to work in munitions factories on the home front to do what had until then been considered men's jobs. They learned to wear pants and demonstrated to the world that there wasn't much about men's work that women couldn't do and they looked pretty swell while they were about it. But the war ended, the menfolk returned and women traded freedom and independence for  performative femininity and imprisonment in the home during the 1950's.


By the time I joined the workforce in the late 80's, women in engineering were a rarity. I loved site work but the environment was thick with testosterone and populated exclusively by Real Men. Nobody would hire me for those kinds of roles and I ended up in a desk job.

It's good to see that Dr Martens, long since reinvented as a fashion brand, still make safety boots and my old boots are available as an icon of their industrial range albeit no longer with the Made in England stamp. But far more encouraging is the fur lined Rosa Rigger boot, which stands on its own both as a practical work boot and as a fashion item. It's a small thing driven by the forces of capitalism, but it's a clear sign of progress. I think we can all agree that this is exactly what Rosie the Riveter should be wearing, instead of a pair of flimsy slip-ons.


Somehow my boots ended up forgotten in the cellar until earlier this year when I unearthed them, cleaned off a decade's worth of dust, and brought them back into circulation. Lately I've been wearing them as minimalist rock&roll workwear with raw denim, a plain white tee and a slash of red lipstick. I've made no attempt to hide the scratches, they are a badge of honour. My boots have scars and so do I.