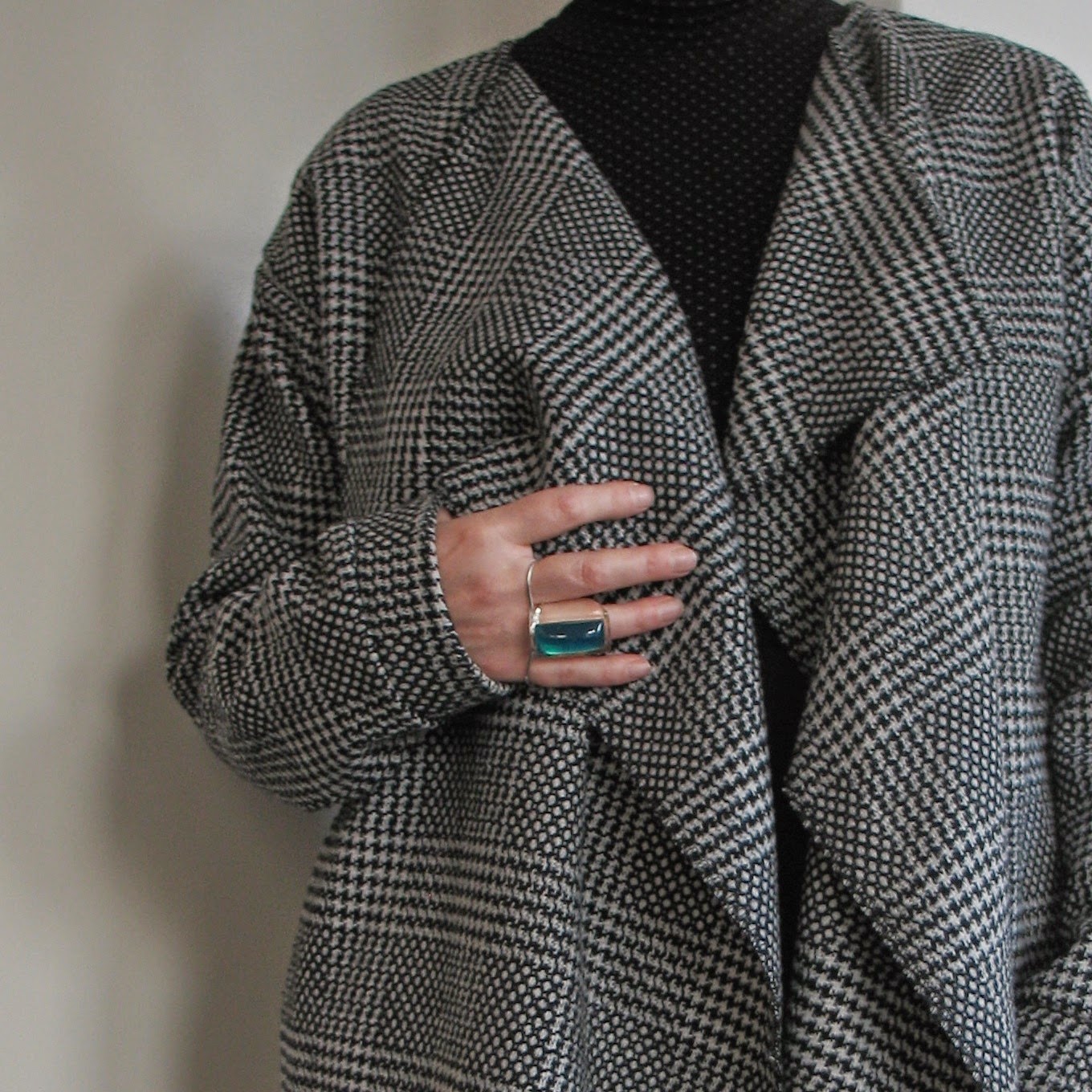 This cardigan was an emergency purchase prompted by bad weather at Primavera Sound in Barcelona last May. It caught my eye while I was traipsing the obligatory festival market, but I might not have gone for it had the skys not opened and rendered my optimistically lightweight weekend wardrobe inadequate. When the storm kicked in I knew exactly where to look for that much-needed extra layer.

A festival market might seem an unlikely source of alternative fashion but it can be a good platform for small local brands and independent designers looking for a foothold with a hip young audience. Among the knit-your-own sandals and Joy Division t-shirts there's often treasure to be found and at prices accessible to a crowd of impovorished twentysomethings a long way away from the crass commercialism of the high street.


Pitagora BCN are occupying this niche with their trendy basics. Their racks of minimalist geometric designs in bold colours packaged up with a rough-and-ready aesthetic have become a regular feature of Barcelona's urban party scene, where they sell hand made, locally produced unisex clothing with a commitment to quality and affordability.


We're very much accustomed to seeing masculine clothing for women, but it's relatively uncommon to see designs crossing the other way. If a garment is considered conventionally unisex, you can bet your last pound that it's essentially men's clothing that women are allowed to wear. A clear line is drawn, with unisex firmly on the masculine side.

This takes a radical turn when the androgynous interpretation takes its cues from womenswear. Pitagora are interesting in that they position themselves as a menswear brand while on the hanger their designs tend to read the exact opposite. The lines of the clothing are soft and fluid in direct contrast with their bold geometric patterns.

The design of this draped front jacket has been so thoroughly entrenched in womenswear for so long that at first glance it's astonishing to see it modelled on their website by a bearded man in a wolf mask. But looking again at the form in a masculine context prompts the question: why not? Why wouldn't he wear a jacket with no buttons and a drape at the front? It's comfortable and practical. It suits him.

Mainstream men's fashion is at best ambivalent about departures from the norm, but traditional forms such as kilts, sarongs or kurtas leave room for manoeuvre. The art of sensual display finds expression in the most macho of sports, la Tauromaquia, where masculinity, violence and death are eroticised in the bullring through the matador's elaborate costume. Could this rich heritage create a willingness to adopt more flamboyant urban styling?

Regardless of cult branding or street style, gender boundaries continue to be strictly policed. The very idea of cisgendered heterosexual men taking on clothing that might conceivably read as effeminate is unthinkable in some quarters, so it seems inevitable that this garment has made it onto the Internet predominantly on the backs of women.

I'd be remiss not to mention that "hand made" is more synonymous with "home made" than "petits mains" in this instance, but as a sewist this doesn't bother me at all. I recognise the details of small scale production and I feel a camaraderie with the person who made it. The open-ended construction belies the anonymity of the factory finish and brings the wearer closer to the manufacturing process. What's lacking in finesse is more than made up for with attitude and authenticity.


On the face of it this seems like an ideal model for sustainable fashion: small scale, localized production units turning out unique pieces their clientelle can afford, in direct contact with them at point of sale guerilla-style. But controlling price and operations at this level presents problems for young, ambitious designers. A small business depends on growth in order to thrive and it's hard to see how manufacture can scale up without raising costs or defaulting to mass production. The challenge is establishing a supply chain that can deliver the same quality at the right price, while allowing hands-on access to the production process. Invariably, the choice for the garage brand is to go big or go home. 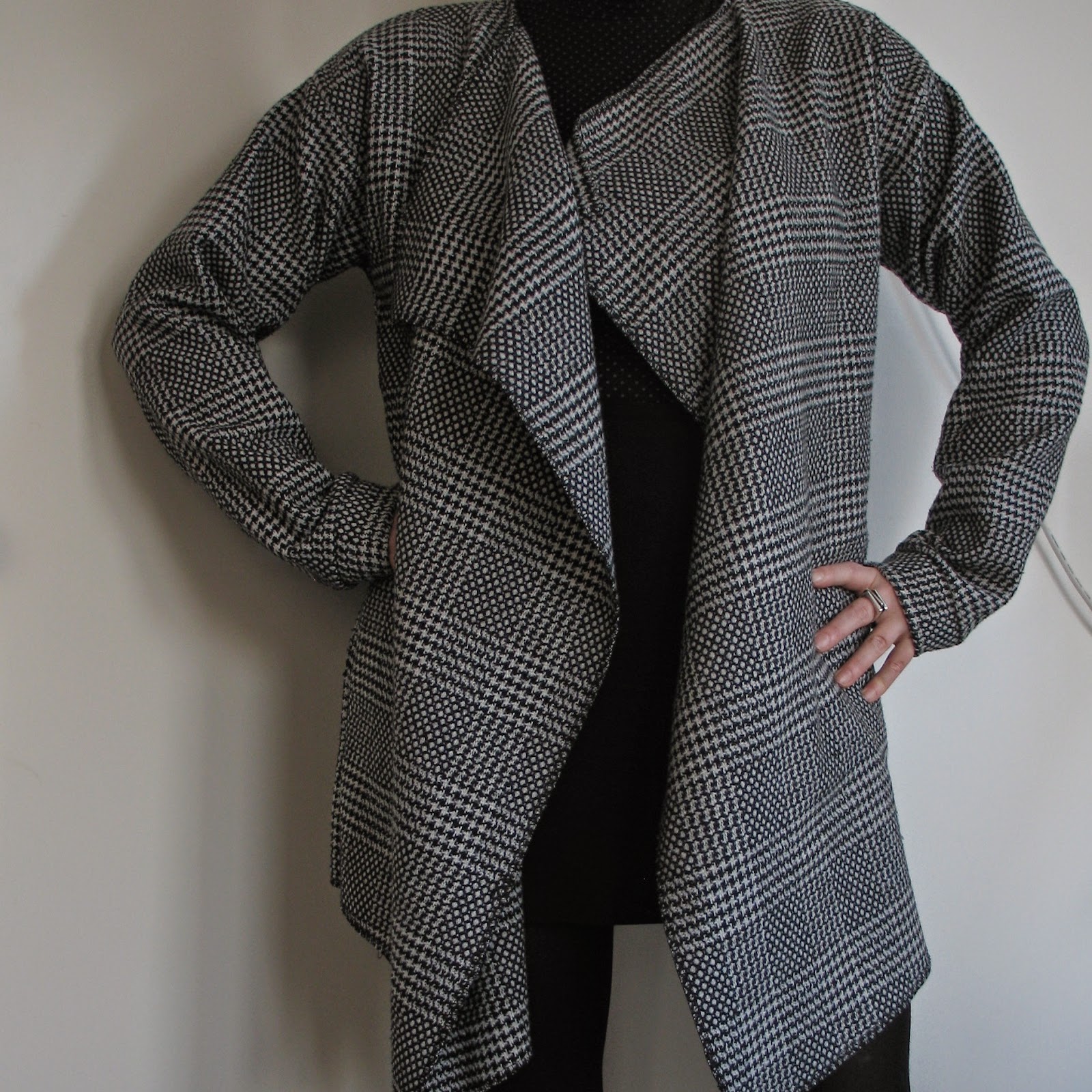 But none of this feels relevant to the exuberance of the garments themselves, or the improbable thrill of finding a rack full of genuinely beautiful clothing in such an unexpected location. Pitagora know what they want to achieve stylistically and have created some fine designs in quality materials. If the finish is a little rough, so what? You get what you pay for and a €50 mass-produced jacket from a chain store isn't necessarily better value, particularly when you factor in the human cost.

My cardigan languished in the closet all summer but when winter kicked in it came into its own in the chilly weather, layered under Mr Edge's black leather jacket when I felt like appropriating a little moto chic. And when I'm next in Barcelona, I'll definitely be keeping my eyes peeled to score one or two of those striking t-shirts. Can't get enough of this solid geometry.