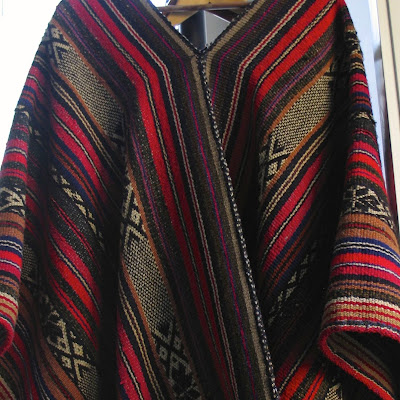 This poncho is the sartorial equivalent of a holiday snapshot: a traditional textile purchased on vacation in Peru. We walked the Inca Trail to Machu Picchu, ate piranha ceviche on the Amazon, and went shopping for blankets in Cusco.

In the space of a few seasons, wearing a blanket has gone from fringe (ahem) trend to completely normalised in fashion land, thanks to Louis Vuitton's eyewateringly expensive throws and Burberry Prorsum's faintly ridiculous monogrammed security blankets. Suffice to say that this was absolutely  not the case when I bought this over ten years ago.

But I'll say it upfront, if my wardrobe were to catch fire, this unique piece would be one of the first things I'd rescue. Its controversial status as a fashion item has never bothered me particularly when for every snide remark from one onlooker there's always been a gasp of admiration from another. Beauty is in the eye of the beholder and this is no ordinary blanket.

The textiles of Peru are among the most prized in the world, not least due to their cultural significance which is tied inexorably to a history that goes back thousands of years. Weaving as an art form survived colonisation by the Spanish and the incorporation of European motifs, and continues to be central to the identity of indigenous communities in the Andes. Throughout the continent, the colourful clothing of Native South America serve as a reminder of a pre-Columbian imperial heritage and a powerful expression of the past. 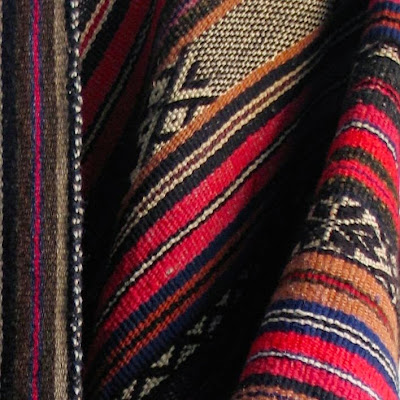 These intricate textiles have long been used as clothing, furnishings, status symbols and trading goods. Spinning and weaving skills, handed down through generations, were a route to economic and cultural empowerment for women providing income for their families, and among the Mapuche people of Chile, an expert weaver could receive a larger dowry from her suitor than she would be expected to pay herself.

Yarn spun from the fleece of the alpaca is hand-dyed with vegetable pigments. The cochineal beetle is the source of the vivid carmine red which dominates the designs. The manual weaving process uses a primitive back strap loom and a poncho like mine would take many, many days to produce.


From outside South America it's all too easy to dissociate the imagery of these pre-Columbian art forms from the realities of contemporary life in the region. Away from the context of their extraordinary legacy, the rich patterns of Andean textiles can appear quaint, like picture postcards or museum pieces rather than vibrant expressions of a living culture. They become a commodity of fashion, as desirably ephemeral as a souvenir of a winter vacation and they proliferate on an industrial scale.

On the surface, the sleek finish of performance textiles echoing traditional designs appeals to the discerning consumer's eye, further exoticised by the implied rebellion of youthful skate wear. It invites comparison with an age old art form and becomes preferable in its modernity. But far from being prized and cherished like its handwoven ancestor, this is disposable footwear to be worn to death for a season and then discarded.

Like Cusco's rickety colonial church balanced precariously on massive earthquake-resistant Incan foundations, the reflection of the master weaver's exquisite craftsmanship on inexpensive mass-produced trainers is an incongruous symbol of Western imperialism, entirely indifferent to the vicissitudes of life among the colonised in developing countries.

The pattern of plunder and trade-off by white power repeats itself throughout modern history and when we take on the trappings of another culture without respect or consent we are unwitting participants in this cycle. Then again, an advanced society that supported its artisan class was bound to spread its influence through traded goods, and textiles have always played a unique and important role in that cultural exchange.

So where does this leave me? Is my choice of blanket an act of appropriation or appreciation?

Minh-Ha Pham poses a thoughtful critique on the limits to discussion on cultural appropriation in which I think I might have been exonerated. I paid a fair price for a heritage piece in a reputable shop, and judging by the craftsmanship, I hope whoever made it would have been well remunerated. Nevertheless, I'm well aware of my white privilege, prancing around town like Lady Muck in an heirloom textile that for all I know could have been sold to make rent.

The fact remains that any nameless hero who puts on a poncho immediately marks out her status as the rough-riding outlaw among duster-wearing cowboys. Clint Eastwood's iconic performance ensures an inevitable market for reproductions of "authentic" artefacts in which the Mexican version of the garment is completely recontextualized as a costume for play-acting, barely paying lip service to the rich heritage that birthed it.


But lady badassery doesn't need to channel The Man With No Name and a quality Andean poncho is surprisingly easy to wear. It packs very easily, layers over almost anything and I'm told the dense fabric is completely waterproof, although I've never dared test that. I can well believe it because the traditional technique looms the wool with its natural oils intact. Threads of Peru has a small but varied selection of luxe fair-trade alpaca ponchos, but if your budget doesn't stretch that far you can source a handsome example from eBay trader Maria de Peru.